Saturday 22nd February
We had stayed overnight at 65.09S and early on we made our way through the Penola Strait to Peterman Island and then onwards to the Yalour Islands. The landing here enabled us to see at close quarters a colony of Adelie penguins and exposed granite which had been glaciated making the small hills on each of the islands into roche moutonnes (these are mounds of rock that have been scratched by the ice and the end of the rock where the ice moved onto another part of the island is jagged as the ice plucked the rocks away. This makes the rock look like a sleeping sheep and hence the name.) The islands also have examples of orange lichens and green mosses. 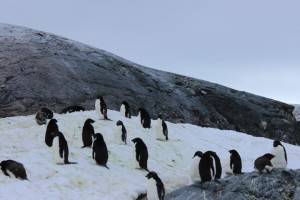 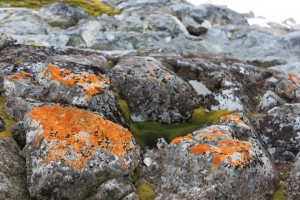 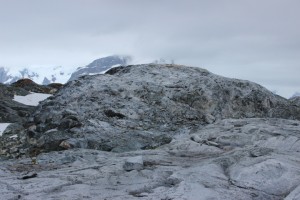 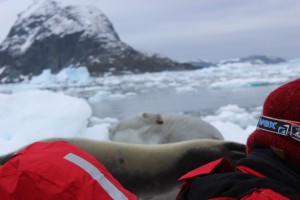 A Zodiac cruise followed and took us past icebergs which were ready to tumble and turn over, as well as ones which still had the remains of moraines that were originally on the surface of the glacier before it reached the sea. We also saw and collected for this eveningâ€™s cocktails, black ice of about 20,000 years of age. This only looks black when in the water because of the refraction of the light, but once out of the sea it is crystal clear and contains samples of the â€˜air of the dayâ€™ when the snow fell those thousands of years ago and was then compacted into ice. It is anticipated that the ice for this eveningâ€™s G&T will be from this ice!!!! 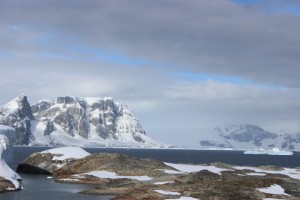 During lunch the ship was repositioned to 65.13S to enable us to visit the Academician Vernadskiy Station, a Ukranian base on Galindez Island.
The Ukranian base is a working establishment and continues the work of the British Antarctic Survey when this was, until 1996, the Faraday Base. It was sold for One Pound and this coin is embedded in the bar between the two beer taps. We were able to tour the base and at the end visit a small gift shop and sample the home-made â€˜hoochâ€™ Gorilka. It is best drunk in one go, and according to one member of the Lisle Tours team, it was interesting!!! 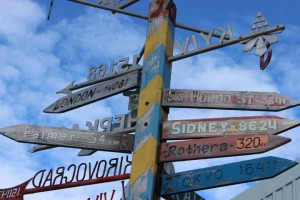 On a nearby island is Wordie House. The original building was imported from the UK in 1934 for the British Graham Land expedition. The aim of this was to prove whether the area known today as the Antarctic Peninsula was actually connected to the Antarctic mainland. It was, and from 1960 this region has been known as the Antarctic Peninsula, and not Graham Land. The latter is reserved for the massive glacier that overlooks the house. Inside Wordie House are the rusting tins of food, coffee, milk powder and the like as well as the domestic and scientific equipment of the days until the sale in 1996.
A walk up the nearby hill provided amazing views of ice fields, glaciers and the bay, open to the Southern Ocean, all in the most amazing sunshine. It was hard to believe that this was the bottom of the World. 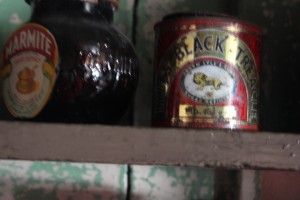 As we write the sun is setting and the colours are spreading over the glaciers and ice fields as we ply our way north towards Deception Island in the South Shetland Islands in time for a breakfast time landfall. 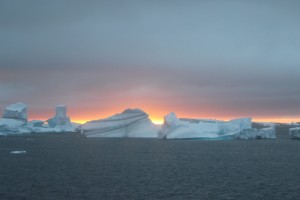