Thursday 20th February
During breakfast this morning we observed Humpback whales following our route. Today we stepped on the mainland of Antarctica at Neko Harbour at 64.50S. We anchored in Andvord Bay and made our way by Zodiac to a beach with high ice covered mountains as a backdrop. Here we saw more Gentoo penguins and chicks. Many of the adults were moulting and it was interesting to see how many of them stood on the nest like statues and let the feathers fall off! Following this we participated in another Zodiac cruise around the area. We broke through thin ice, past icebergs sculptured into amazing shapes and began to be coated by horizontal snow. We also watched Minke whales circling looking for food. But the greatest thing was we were on the continent and not an island. On approach the water was so clear that not only did we see the submerged parts of icebergs but a possible submarine limestone pavement showing evidence of Antarcticaâ€™s sedimentary past. 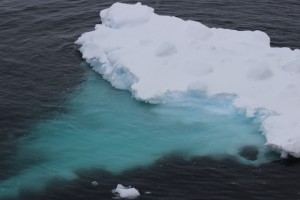 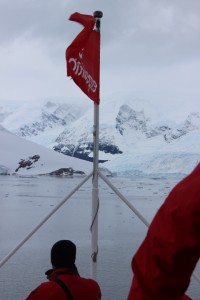 During lunch we moved further south to Paradise Harbour to the Brown Station, an Argentinian scientific base, although not much science takes place there now. The Zodiac cruise took us through more ice to bays fringed by glaciers, although they were difficult to see because of the snow – but this is Antarctica! As we write this at Â 9:00 p.m. it is a different day, though freezing on exposed metal. We saw a berg with a complete arch and turquoise blue ice. We saw nature in the raw. As we approached a young blue-eyed shag was being eaten alive by a skua! We passed ice floes with leopard basking basking but without sunlight! These animals have nothing to fear being at the top of the food chain. 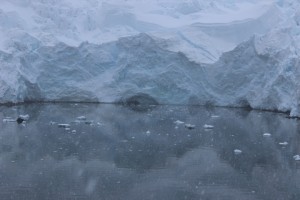 It is difficult to put into words what this place is like or what it means to each person. Tonight we move to Port Lockroy where we will anchor ready for tomorrow morningâ€™s excursion.