Wednesday 19th February
The night was windy and rainy but on our way to breakfast we saw snow and ice had coated the lifeboats and some of the exposed metal of the upper decks. There were rumours of a snowball fight on the aft observation deck. The onboard glaciologist described the crossing of the Drake Passage as the flattest he had ever seen in 10 years. By 11:20 a.m. we had spotted our first iceberg and land on the horizon when we reached 62S. This was immediately announced on the public address system. By the time we were starting lunch at 1:00 p.m. we were slipping past islands, many covered with snow and ice. The swell increased, the sea turned a steely grey and then in what seemed a short time, the sky was blue, the sun shone and we dropped anchor ahead of schedule off the Aitcho Islands, part of the South Shetland Islands at 62.24S, 59.44W. We had arrived!!! 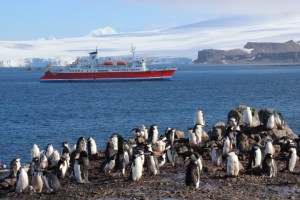 After a short briefing we had a special treat – an extra pair of landings to two small islands of the Aitcho group. We transferred from the ship by Zodiac inflatable dinghies. Upon arrival at the beach on Barrientos Island, we were greeted by hundreds of Gentoo and Chinstrap penguins, all standing to attention! We were free to walk from the volcanic ash beach across the boulder field where many of the penguins had nested and were feeding their young. There was a distinct â€˜essence of penguinâ€™ in the air! We also saw elephant and fur seals and an extensive â€˜meadowâ€™ of moss. Following a transfer to Cecilia Island we were lucky to witness Giant Petrels and their chicks nesting on the volcanic cliffs, Snow Petrels, as well as more penguins and fur seals. The volcanic peaks are covered with red/orange lichens which grow at a rate of 1cm every 100 years! 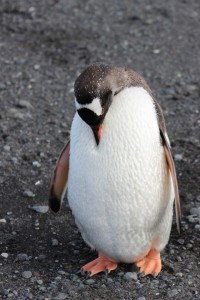 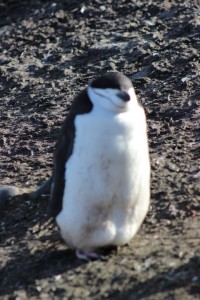 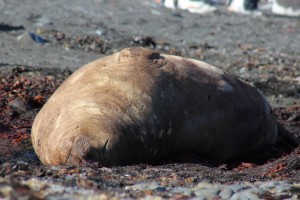 As we write (6:30 p.m.) the ship is moving to again down the Bransfield Strait towards the mainland of the Antarctic Peninsula. We are surrounded by islands, ocean and ice and have spotted humpback whales nearby.