By 6:00 a.m. we left the Gatun lock system, where locomotives called mules use steel cables to keep the ships in the middle of the lock as there is very little room to spare. 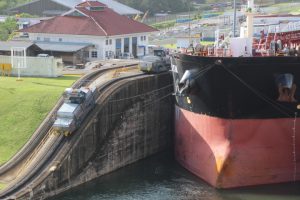 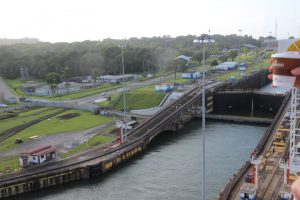 Again, all was quiet until we left the Atlantic reception area and were hit by the Beaufort 6 winds and waves. That was the only time so far today we knew we were moving. We may be heading for Florida and even the British Consulate in Miami has been in touch, but it is too early to tell. 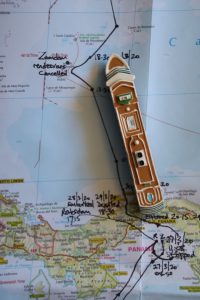 We had a small breakfast as we really haven’t moved much for 2 days!

By sunset we were heading northeast towards Cuba.

The canal cuts across the very, very twisty Isthmus of Panama, but large scale maps do not show the twistiness very clearly. On a large scale map there would be more sea than land. Howard remembers buying an OS map of Spurn Point – more than two-thirds of it was water. It is a massive conduit to maritime trade, so much so a new canal running parallel to the original one was opened in 2016. This allows even bigger ships (Neo-Panamax) to transit. We saw a couple of these that had increasing heights of stacks of containers from bow to stern that had an aeroplane body shape.

The French engineer Ferdinand de Lessops began work on the Panama in 1881 following his success with the Suez Canal, the latter was dug across the desert at sea level. At Panama he clearly did not appreciate the difficult terrain – rainforests, high volcanic mountains, high humidity, high temperatures and lots of disease, because he proposed a sea level canal by moving the landscape away. He failed and the US took over in 1904 completing it in 1914. That original concrete was visible from our room in the locks. The route saves thousands of miles and thousands of dollars by avoiding rounding the Horn.