Today we explored the port of Athens in the suburb of Piraeus. During medieval times the port was known as Porto Leone in tribute to a 3 metre high ancient marble lion. In 1688 the Venetians stole it and relocated it to Venice. Apparently the city council is now negotiating its return.Â Today the port is used by ferries that connect Athens to the islands of Greece but it is also the third largest Mediterranean port which handles cargo ships, oil tankers are more recently cruise ships. It is interesting at the current time to reflect upon part of the ports history because in 1922 the first factories were established here and manned by an influx of refugees from Asia Minor (the Middle East of today). In 2004 for the Olympics the port and its hinterland underwent a huge makeover. These complexes are there today but not all be used. 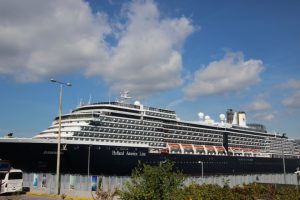 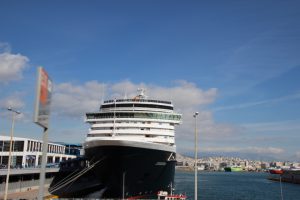 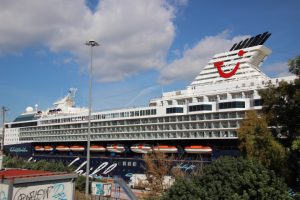 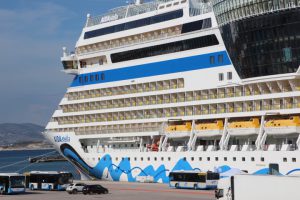 Our open top bus took us past the port and people from the cruise ships boarded the bus for an afternoon in Athens. 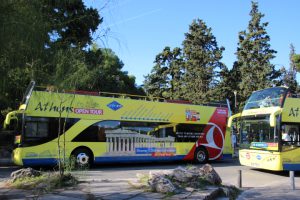 We left the bus at Pasalimani, a large semi-circular bay with a narrow opening to the sea. The bay is now has a tree-lined promenade overlooked by open-air cafes and the home of up to 400 of the most impressive motor yachts in Greece. This is a far cry from the same harbour in the 5th century BC which could accommodate 196 triremes. Each one was 40 metres in length and 5 metres wide and were noted for their great speed of up to 12 knots. The boats were powered by 170 oarsmen seated on three tiers. Apart from being battleships these vessels enabled Greece to trade with the east and west Mediterranean. 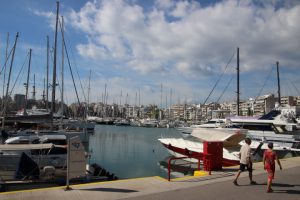 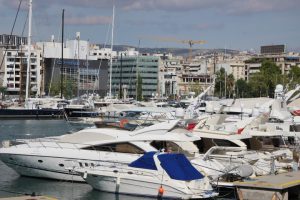 We ate lunch in another suburb, with its small bay, called Mikrolimano. The ancient Greeks who kept their ships here believed it was protected by the goddess Munichia Artemis and initially named it after her. Today the harbour is filled with the small wooden boats of local fishermen who supply the surrounding restaurants with their daily catch. The squid was delicious!!

Close by is the Peace and Friendship Stadium which hosted basketball championships in the 1990s and volleyball in the Olympics. Across the motorway is a big football stadium which is the home ground of Olympiacos FC. 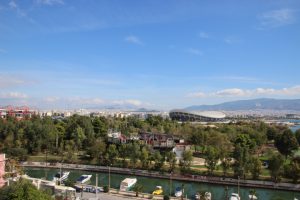 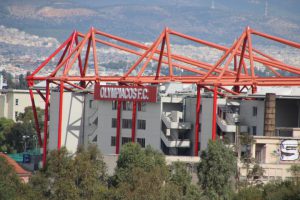