We travelled from the Somme to reach our ferry back to Dover. At the dockside this is what we saw.

Having checked in we await our departure and explore the lorries and cars waiting to go onboard.

This was the end of a very interesting and informative week.

We drove to Talmas to complete the photographs of an earlier visit. We were able to find a location we had previously missed and on driving to the next village came across a sunken lane that was sunk and flooded!!!!

The next village Rubempre proved difficult. We were confident in one location but so many changes had taken place that the other WW1 locations were hard to find.

Lunchtime saw us in Albert. we visited the basilica and were able to complete the ‘now’ photographs of the building and the statue of the Virgin Mary. During WW1 the British troops believed that, either the war would end if the statue fell, or that the side that demolished he would lose. Allegedly, the British engineers propped up the statue after a near miss but records are unsure as to who fired the shot. But she did not fall!!!!

After lunch we visited Le Petit Train de la Somme. This narrow gauge railway was built in 1915/16 to supply the Allied front line with ammunition, food, water and men. Today it stops at Dompierre-Becquincourt, the site of a sugar beet storage depot. There is a 230 metre tunnel, a substantial bridge and a zigzag incline onto the plateau (rather like the railways of the Andes) which are a testament to the constructional skills of the Royal Engineers. After the war it was used to transport the sugar beet to a refinery. This was one of many similar lines across the Western Front, but this is the sole survivor.

Returning to our hotel we passed an Airbus Industrie factory which is being expanded for the construction of new, big Airbus aeroplanes. This is an A380 cockpit at the roundabout.

First visit of the day was to Morlancourt, a village used as a staging post for troops en route to the front at Thiepval. The scene below is the village in 1915/16, before the Battle of the Somme.

The next village was Proyart. Again there was an amazing surprise. Upon walking past a group of men to take the present day photograph, the Mayor introduced himself and asked what we were doing and if we had the time he would show us some things of WW1 that he was confident we would be interested in. Retrieving the keys from his car he took us into the back room of his office which was a museum of maps, artefacts, photographs, personal accounts and copies of newspapers and magazines that told the story of the French battle at his village on August 29th 1914. At this time in WW1 the small number of British soldiers were unable to help but with cunning the French managed to trap the Germans and stop their advance until more British troops arrived on the Western Front. This is where the Lisle family started their active service. It was a most interesting interlude and informed us about something so rarely explained back home.

During the afternoon we made a quick visit to the Tank Memorial (British) at Pozieres. This commemorates the first extensive use of tanks in war during September 1916.

Across the road is the mound of earth upon which the Pozieres windmill used to stand. This windmill offered views over both front lines so both sides were desperate to hold it. The Australians finally held it in 1916 but suffered their biggest losses in doing so.

Across the valley is the Thiepval Memorial to the missing of the Somme. On one of the panels is the name Partington J who was a cousin of Grandad Partington. He was killed in action in July 1916, but initially recorded as missing.

Arras was the site of many battles during the Great War. Much damage was done to the historic centre of the town which has now been rebuilt in the original style.

We returned to the Arras Memorial in search of John Lisle. For years he was deemed to be missing in action, but recent research has shown that he was found, but is only remembered as a name on the addenda panels. (Unfortunately we couldn’t find his name on the panels.)

We stopped for lunch before Albert within site of the TGV line as it swept across Picardie. One could hear the distant rumble as the high speed trains approached.

Our main task was to find the 49th (West Riding) Division Memorial. This is the remains of a second line of defines trenches and a dressing station of 1916/17. This was where the local battalions, such as 1/4 KOYLI, the Bradford Pals and others from West and South Yorkshire were amalgamated in 1915 to form a fighting division to protect the Ypres-Yser Canal which was the link to the North Sea. Essentially 2 years of fighting and thousands of deaths led to a capture of a 100 yards of land.

Across the canal is the Yorkshire Trench and Dugout system of 1915-17. It is in an industrial area today, discovered by accident in 1992 and now preserved, but was the first line of defence for the 49th Division.

We went exploring other battlefields but by the end of the day we were at the Menin Gate at Ypres for the daily service of the Last Post at 8:00 p.m. Hundreds of people stood in silence as the Post was played and wreaths were laid in memory of the thousands lost in the battles for the Ypres Salient.

First thing today we explored Bollezeele. We spoke to some local people about the old photographs and captured these images. This was a stopping off point for troops en route to the Ypres Salient.

We headed north to Bergues, an ancient fortified town, which was an allied headquarters. This walled and gated town has small canals lined with warehouses where the produce from a landscape similar to The Netherlands was brought for purchase and distribution.

We then drove to Veurne (Furnes) which was a major administration and supply depot, near the Channel ports. Returning to Bollezeele one crosses the flax fields of Flanders. This is the staple crop for linen and oil manufacturing.

It is 9:00 p.m. and we have just eaten dinner in the Hostellerie Saint-Louis in Bollezeele (Nord), France, a small town that Grandad Partington stayed in during 1915 or 1916 prior to a battle at Ypres in Belgium. The hotel was originally a hospice but may have been a field station during the Great War. 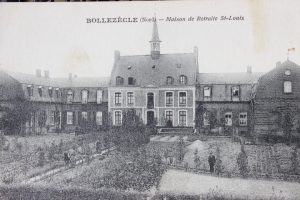 To reach Bollezeele we travelled by ferry from Dover to Calais. The Spirit of France is one of two of the largest cross Channel ferries ever built.

Following arrival in Calais we explored the area around the Channel Tunnel, coming across remains of one of the ‘moles’ that did the digging of the tunnel from the French side.

Later we crossed ‘The Cloth of Gold’. This is an area of farmland near Guines where Henry VIII met the King of France for a 16th century ‘G8’ conference. (one mustn’t forget England owned large areas of this region and the King of France wanted them back!!! We don’t know of a supermarket at home that is located in such a historic location.

At lunchtime we returned to a giant bunker, near Eperlecques, built to launch V2 rockets (German) to England which was seriously damaged in 1943 and put out of action. The concrete is so thick that the main building is merely scratched but the vital support structures were ruined.

Prior to our arrival in our hotel we passed through the village of Pitgam, where on a family cycling holiday we were based for a few days. Today we couldn’t find the campsite but the fields of flax are still there.

Our mission is to take the photographs from 1914/16 back to their locations and record present day.

This is where we are staying on our first night and is in the village where grandfather stopped before the first battle of Ypres. 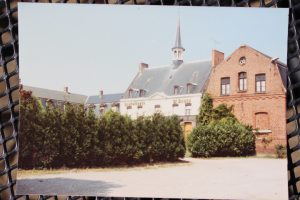